The rest of our week at Winding River Resort was wonderful; we had a great balance of adventure and down time. We spent lots of time at playgrounds, took naps during thunderstorms, saw majestic wildlife, watched movies, ate several meals out including breakfast in Grand Lake and Chinese food in Granby (the kids LOVED it and though I’m not usually a big fan, it was excellent food), grilled hot dogs and asparagus and made s’mores with the kids under a starry sky, had a productive cleaning day to scrub the filth from the RV (I know that doesn’t sound fun, but it felt wonderful to get it done), and went on a few hikes.

After a couple false starts, I was thrilled to finally accomplish some good hikes. Adams Falls in RMNP was lovely and fairly easy, though we extended the basic loop hike by a couple of miles to get a better workout in. We also went on a great hike in the Arapaho National Forest, which was amazing, but also an adventure. We were able to bring the dogs with us and let them roam off-leash. They had the time of their lives and were very well-behaved! The hike is easy-moderate intensity and intended to be a 3.5-mile loop. However, we managed to get lost at one point and went a couple of miles out of our way. Not a huge deal, except we were out of water by the time we realized we were lost and backtracking meant climbing the bloody mountain again! I kept my cool, but had to keep fighting back scary thoughts of being lost in a forest, deh 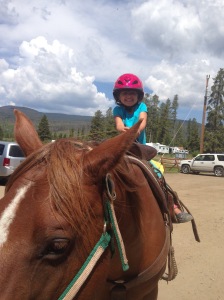 ydrated, with kids and dogs (in bear-country no less!). Eventually, we completed the hike and we were both incredibly exhausted from the heat, exertion and lack of water, and since I carried the big backpack, my clavicle was literally bruised from the weight, but ultimately, it was a satisfying hike.  We also did another super easy “hike” in RMNP, and it was gorgeous; we even saw a moose chilling in the trees!

Nina also had her first real pony ride and absolutely adored it! Her smile never faded as we walked her through the resort for 30 minutes. I was so proud of her; she never seemed nervous and sat up straight in her saddle. It was a fantastic memory for all of us. She is hooked! Like Mother; like daughter!

Our last day there, we decided to go to the camp’s Chuck-Wagon breakfast. There was a surprisingly long line to get massive, yet not so great pancakes and sausages, but it was a fun experience. We spent so much time waiting around that we missed our window to go on a 4×4 adventure in the Jeep we had scoped, but alas, kiddos needed naps. That afternoon, storms moved through again and we thought our scheduled hayride would be cancelled. Just 30 minutes before the start, it was hailing, so I called expecting them to tell me it was off, but they said it was still going to happen! Uh… ok?? But sure enough, just as we opened the door to head out, it cleared up. Though it drizzled during the hayride, the kids enjoyed it (Raj and I 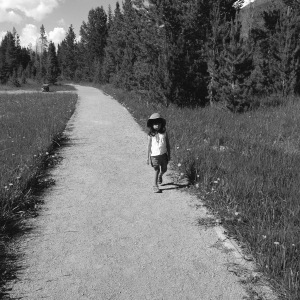 After the hayride, we said goodbye to horses and animals at their animal farm and started loading up so we could head to Fort Collins in the morning to visit friends and then get to Cheyenne for the tow bar/braking system installation.

My final thoughts on Rocky Mountain National Park:  RMNP should be on everyone’s list to visit – it’s impressive in so many ways: size, wildlife, scenery, management – it truly is a national treasure. We visited as its 100 year anniversary was celebrated; it was designated a protected land by President Woodrow Wilson just one year before the National Park Service was created. There are 72 named peaks that reach above 12,000 feet! 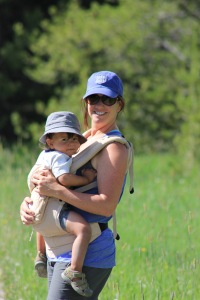 The Trail Ridge Road crosses from Estes Park on the East, through the Continental Divide and Pass, and ends in Grand Lake. We stayed on both ends and crossed the ridge in each direction. Though we only stayed in Estes for one night, here are some thoughts on the different sides, for travelers trying to choose:

Estes Park is by far the more populated of the two (we even experienced crowds). However, it is also much more green and beautiful. There is more to do in town, and there are more family friendly hikes. The Grand Lake side, in comparison, offers a more pure, quaint, rustic vibe; more wildlife is spotted on this side of the park too. Grand Lake has lots of horseback riding and an authentic “cowboy” thing going on. Though we were told their economy is struggling, we enjoyed the town and its offerings immensely and saw no sign of trouble.

Since we were traveling with dogs, we preferred hiking in nearby National Forests (dogs are not allowed on hiking trails in RMNP); plus, the National Forest trails were less crowded. Both areas are dry/arid/dusty, and both sides just suffered the pine beetle devastation that occurs in 30-year cycles, yet both have abundant lovely wildflowers, snow, sweeping views, and plentiful wildlife. I hope that helps you figure out which side may be right for you! I doubt you can choose wrong!