Whenever anyone asked about our plans, we would give them the lowdown, and finish with “…and then Crater Lake… after that we book it home to Atlanta.” This was usually met with raised eyebrows (regarding making it from Oregon to Georgia in good time) and if the person had been to Crater Lake, an obligatory “ooh, it’s so beautiful there – you’ll love it.” We also ascertained in our discussions that we wouldn’t need to spend a whole lot of time there, and even though there is enough in the surrounding area to fill up a week if we tried, when we arrived, we were more in the mindset of just seeing the highlights and moving on.

To be honest, I was still fighting a cold, I was coming down off my high from

being at the beach, and I was a bit homesick again. Despite that, on the drive there, Raj and i were discussing the possibility of extending our trip again (only by a week or two) in order to head home along a meandering route that would allow us to explore Zion National Park and Bryce Canyon. We were both really conflicted about it but we also just couldn’t wrap our heads around the route from Crater lake directly to Atlanta because it meant a bunch of nothing-all-that-interesting and then a bunch of been-there-done-that. When we hooked into our campsite, we discovered our main living area slide was not working (for non-RVers, this means that the section that opens up to create space in the kitchen/sofa/dinette area wouldn’t open)! Raj checked all the fuses and breakers and eventually contacted our technician at the dealership who helps us troubleshoot from time to time, but all the easy fixes failed to work. The next morning as I went to make coffee in our french press, I p

ulled out the plunger and the top half of the glass came out with it! Right then I looked at Raj and said, “The universe is telling us to get home – we are not extending this trip.” i mean seriously, half of the RV had become claustrophobic and we were down a coffee pot (in the woods.. in the middle of nowhere…with 2 toddlers).

With that established, we decided to see if we could pull off a one day tour of Crater Lake National Park and took off in the Jeep. On the way to the Park we took a small detour so that we could walk along the Rogue River Gorge and see a natural bridge.

When Mount Mazama erupted 7700 years ago (and left the caldera Crater Lake now occupies) the flowing lava carved the natural bridge by essentially burning a tube through the rock. The river now rushes through that lava tube and above it is the bridge. Pretty cool geology lesson, huh? It was a pretty walk, especially because my favorite season was making itself evident all over the leaves! 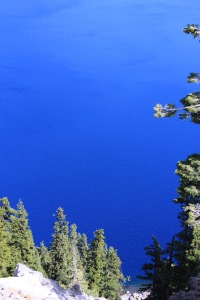 The drive up to Crater Lake was long and curvy, but with the first view of that sapphire blue water surrounded by sheer cliffs, we were glad we made the effort. The water may be the purest in the world, probably because there are no tributaries or inlets so no water flows in or out disrupting the clarity or carrying pollutants; the water level is maintained by the cycle of rain and snowfall then evaporation. At nearly 600 meters, it is also the deepest in the United States.

We drove around the entire rim and stopped at about 7-8 of the overlooks to see the lake from different angles and to get closer to “Phantom Ship” one of the islands formed by eruptions after the caldera began filling with water. I thought it looked more like a castle – what do you think?

It was a beautiful drive and we saw a large hawk and even a large coyote by the side of the road. The only incident was a brief encounter Nina and I had with a barefoot bible-salesman of sorts with a feathered hat, who was offended I wouldn’t take his card. He slung a couple passive aggressive remarks my way – i guess it made him feel better. Though he was quite a character, I admit the experience would have been easier for me to handle had I had coffee that morning – damn that broken french press!

As we grilled steaks and made a salad that evening, we blandly revisited our plan for our drive home – it was to begin the next day after all!

On a whim, I plugged into Maps how far we were from San Francisco, one of our favorite cities and home to many friends, several of whom moved out there from Atlanta. Seven hours of driving separated us from our friends AND for the chance to drive home along a new and different route, including Route 66. I hesitantly mentioned it to Raj, adding that for us to make our deadline home we would have to skip all the other tempting stops in California, we’d likely only have 3-4 nights to see friends and the journey home would be much more aggressive. He stared at me for a beat then shrugged – “Let’s see who’s available on short notice!” Twenty minutes later, with his cousins and at least 2 dear friends already confirming they’d be around, we sat down to dinner with a completely different itinerary than we’d woken up with, but were once again energized and excited! 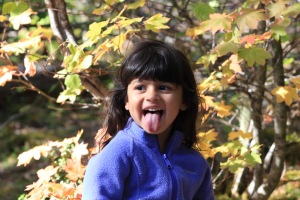 Crater Lake RV Resort – 3.5 stars: Check in was very friendly, site was very long and relatively wide, and it was quiet. Only a community firepit available, wifi was basically useless, and they had allowed our neighbor to hook in their cable to our meter because theirs was broken, but that left us without. Not a huge deal to us as we don’t often watch anyway, but still seemed odd. All other utilities worked fine and there was a nice path for walking. Not a whole lot of options when we were there, as the National Forests and Parks had already closed for the season, so this was a perfectly satisfactory place, but didn’t blow our minds.