While in Jasper I shared my confessions, including being homesick and desiring to be near the coast, and now, I’m writing about our time in Jasper from a guest ranch as horses and cows graze next to our RV. There’s a lake on the property to satisfy my need for water, and even a mountain range with glaciers for Raj. It’s accurate to claim we are in paradise; I am not homesick anymore. I will share in more detail about the special place we currently find ourselves, but for now, I feel Jasper National Park deserves some mention so that you don’t think my foul mood at the time we were there was a reflection of our beautiful surroundings.

The day after my parents left us in Lake Louise, we got on the road to head north through Jasper National Park. We decided to stop about half way there to tour the Columbia Ice Fields. Raj was really looking forward to this as he had visited them 17 years ago and had fond memories, but was also curious to see how far they’ve receded. We called and asked if we should buy tickets, but the customer service person said to just show up and that they had ample RV parking. Well, we got there about 11am, which was later than we’d hoped, and had to wait in line for 30 minutes to buy tickets only to be told that we’d have to wait 4 hours for a tour. With 2 kids and 2 dogs in tow as well as another 2-3 hour drive ahead of us, we just couldn’t do that! Someone had a sick sense of humor telling us we could just show up! Anyway, even though we skipped it, the drive was lovely and we even stopped for lunch at a waterfall and marvel at a powerful cauldron. It’s always helpful on long driving days to stop and stretch our legs. 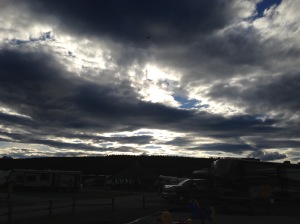 We stayed in an RV park in Hinton, which is only a few miles east of the Jasper Park gate, but nearly an hour from downtown Jasper. We hadn’t been able to secure a spot inside the park because we booked late and also because they have very few sites for larger RVs within the park. This is generally true all over Canada. It’s been interesting to transition from being of average size in the US to being a monstrosity in Canada. It’s all about perspective…

Our first full day in the area was a bust; it was quite cold and rained much of the day, and then I was ill for several hours too. Other than Raj taking Nina for a little lunch date and to get a few provisions, we just took it easy and rested. It was one of the only days this entire trip when we’ve been stuck inside because of weather, but since we were all adjusting to my parents being gone, and I was sick, it was actually timely to have a good excuse for down time.

We were well rested and ready to get out the following day, so we drove 1.5 hours to Malinge Lake in the park. It was a bit crowded, but we enjoyed lunch, a walk and some gorgeous sights. There were some lovely views of the mountains and glaciers and the color of the lakes we passed were stunning; one was emerald green and the other sapphire blue.

We had seen a few large elk already on the drive, but as we left Maligne, we also saw a black bear right next to the road! It was shocking to see tourists out of their vehicles taking pictures, but after several minutes crazy Raj couldn’t resist getting out too! Ok ok, I admit, he convinced me to get out after a while as well. I would not have guessed I would ever feel comfortable doing that, but in truth, that bear could not have cared less that we were all there; all he or she cared about was munching on grasses. 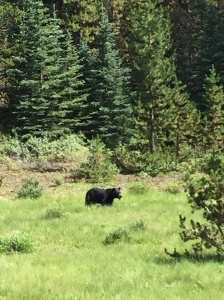 We checked out the town of Jasper on our way back and both liked it there but only had time to get ice cream and play in a green area for a bit before getting back to the dogs. It was a drag to be staying an hour away, especially after already going for a long drive- we just ran out of time. On the way back to the dogs, we had to stop in the road and wait for some kind of mountain goat or sheep to finish licking the salt off the middle of the road! Isn’t it sad that I have no idea what kind of animal it was? In any case, the wildlife viewing and scenery in Jasper was incredible.

KOA Hinton: Nicest KOA we’ve stayed in, especially for dogs. They give dog treats when you check in, have a large fenced in dog play area with an obstacle course type set up and they also have a huge dog walk around a field (meant to be on-leash but so large, we let our dogs roam several time and burn off energy)y. Very quiet place – no traffic or train noise, and a horse farm next door. Lots of amenities including large playground. Satellite Internet was hit or miss – early morning was best bet for us. Typical fairly close sites for KOA but nice management and only 4km to downtown Hinton. No campsite firepits but nice community one.

If you read the confessions post, you know we decided to abandon Jasper, though mostly unexplored, in favor of heading west. When we drove out of Hinton and west through the park we still hadn’t chosen a route. Basically we needed to decide between a northern route through Prince George, or southern closer to Kamloops. Our goal was to make our way to Bella Coola, but also to stop at the Terra Nostra Guest Ranch in the Chicoltin Valley. Since we passed right through Jasper on our drive (for either route), we stopped for an amazing lunch at Olive Bistro (the 4 of us shared poutine, calamari, salad, and dips) and talked through our options. It was a warm and sunny day and I could have sat on that patio drinking Bloody Caesars all afternoon, but instead, after only 2 Caesars, we literally flipped a coin for the Northern route and got on our way.

Along our coin-chosen route, there were few choices for RV parks, but we made good time and decided to get to Purden Lake, about an hour east of Prince George. As we approached, we saw an RV sign so pulled in and were relieved they had a spot open for a Saturday, though it wasn’t on the lake. We didn’t care for 1 night and still walked down to the lake for kids to stretch and get their feet wet. The park was generally pretty but disappointing as it was full of full-timers crammed in together, and the docks were falling apart. That night storms came through just as we got back for dinner so we skipped the fire pit and watched a movie in bed.

In the morning we went to breakfast at the main lodge where they had massive loaves of freshly baked bread, strong coffee and bizarre pricing (though generally reasonable, certain things just didn’t make sense, like $5.50 for a side of toast and jam, or you could buy a whole freshly baked loaf for $6.50).

Once on the road again we stopped in Prince George for groceries and then decided to push through and get as close to the ranch as possible. In the end, it was our longest day yet – 11 hours from RV site to RV site, but we were giddy to arrive at the ranch! Though it was twilight and difficult to see our surroundings, we could feel the energy around us and knew we’d be staying a while.

2 thoughts on “A Quick Tour of Jasper National Park”