So here’s the thing… Raj and I are off-the-beaten-track type travelers – we don’t like resorts, we have little patience for crowds, and we try to understand and (hopefully) feel the heart and soul of any place we are in. Now, we also know we are currently traveling during peak season, so we haven’t exactly been surprised that some campgrounds are full, or some areas have traffic, but we have had pretty good luck and wonderful experiences. Yellowstone National Park, h

owever, was pretty close to a bust. Too many people! Too many vehicles! Lines, crowds, tours, bad, overpriced food… So not our thing. Don’t get me wrong, it’s a fascinating place and worth a trip some time, but don’t go in the middle of summer!

The drive from Dubois, WY to our campsite a few miles outside the entrance to West Yellowstone was lovely (though as usual we left an hour later than we’d planned) and took us right through Grand Tetons National Park, which has dramatic mountain views with fresh snow and fog seeping over peaks – simply stunning. But remember how I mentioned having to pay another RMNP entrance fee as we left because of a grumpy Ranger? Well, it turns out, the Rangers there also failed to mention we could get a pass to ALL the National Parks and it would not have cost us much more! Very annoying, but I mainly blame myself for lack of research. Anyway, in between the two Parks we stopped for lunch, ate some mediocre food, and had a nightmare time with London throwing a fit. There are times when traveling with kids is miserable – this was one of those times – we were “those people” with the toddler screaming and throwing food. Why didn’t we get our food to go and eat in the RV?  I don’t know, but we got out of there as fast as we could once he threw a handful of lettuce all over me. 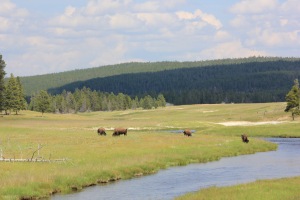 Anyway, our first drive through a small part of Yellowstone we enjoyed the drive along the river, but sat in 45 minutes of traffic which turned out to be a bison herd bottleneck, and we were frustrated to pass by so many scenic sites because there was not enough parking. Our initial reaction was amazement at how much busier it was than the RMNP area, and how overwhelmingly large the whole park is (there are 2 main loops and each one is about 70 miles!). We settled in at our KOA campground (we don’t love KOAs but they often have available sites in more crowded locations, and they offer the benefit of knowing what to expect), we grilled burgers and made a salad and focused on an earlier bed time for the kids. Impressive storms passed through that night but Raj missed them as he was asleep by 9:15, so I stayed up writing.

Predictably, we just couldn’t get it together the next morning (I have many theories as to why and will go into them more at a later date, but we are consistently an hour to an hour and a half behind our planned schedule and it’s making me crazy). We had wanted to leave early to get to Yellowstone and see the main sites, but we didn’t get out of camp until nearly 11 (so yeah, more like 3 hours behind this time)! As we got to town, traffic was totally jammed up with tourists trying to get into the park! We detoured quickly and decided to go to the Grizzly and Wolf Discovery Center, which a couple of travelers had mentioned. I was afraid it would be touristy and cheesy, but it was actually wonderful and incredibly informative. They have 8 Grizzly bears and about 10 wolves, in addition to the museum, and they offer educational tours. The wolves were taking a siesta from the heat so we didn’t get great photos of them as they were just lying around, but we saw a couple of bears (brother and sister) foraging for food – they were so close! I’m always surprised that an animal so feared in the wild can appear so unintimidating when an enclosure separates them from me.

We had another lousy meal at an “authentic” Mexican place and then drove into Yellowstone as both kids napped; we tried to get to a farther away portion of the park. We were not terribly impressed overall – there is som

e cool stuff for sure and the sheer magnitude of the park is amazing, but it was lots of driving to get to touristy spots, then back in the car for more driving. Not that much wildlife in comparison to RMNP yet people stop traffic for 30 minutes at the sight of 1 elk or bison. Our favorite part of the drive was a 6 mile off-road gravel loop where, for about 10 minutes, it felt like we had the park and all the beautiful wildflower fields to ourselves. In fact, the wildflowers may have been my favorite part of Yellowstone – everything from vibrant yellow, bubblegum pink, lavender, white, and hot pink could be found growing acre after acre.

Though already frustrated with the crowds, we still wanted to see a few more attractions inside the Park. We successfully got out of camp earlier the following day, stopped for really bad coffee and muffins, and waited in traffic for 20 minutes to enter the park. We saw a nice waterfall– again on a side street drive – and found a less popular geyser where a ranger was advising to wait because it was predicted to erupt. Lucky us! It was impressive; we had a front row seat and comparatively no crowd, b 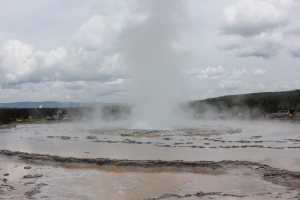 ut poor London was a bit startled as it started spewing! After that, we went to Old Faithful for the obligatory viewing, though it was ridiculously crowded and disappointing after the show we had just witnessed, and then decided we had had enough of Yellowstone and the tourist vibe. We missed seeing things we had hoped to explore, but the drives were just too long, crowds too great, and our poor dogs were stuck in the RV because they

aren’t allowed on any paths in the park. Our kids clearly needed down time and I felt drained so we relaxed for a couple of hours, then decided to go to dinner. Our dining experience at Bar N Ranch was easily the highlight of our entire time at Yellowstone, as it offered stunning ranch views, lovely decor and delicious and well-crafted food. All in all, it was a very disappointing couple of days – we were so ready to get out of Wyoming and see our friends in Bozeman, MT.

KOA Mountainside/West Yellowstone – nice amenities, including nature trail and fresh pizza in their store. Sites close together as always with KOA. A bit far from town/entrance to Yellowstone, but better views and a bit more space based on what we saw driving in. Tip – go to the Bar N Ranch for a really nice meal.

One thought on “Oh Yellowstone…”